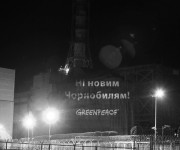 September 21, 2012 Vienna, Austria – Greenpeace and Bankwatch appealed to the President of Ukraine to veto the law that allows construction of two new nuclear power units at the Khmelnitsky NPP. They expressed concern in an open letter to Viktor Yanukovych on behalf of millions of European citizens who were deprived of the right, enshrined in Espoo Convention, to fully participate in the discussion of this risky project [1-4].

“Consultations with neighboring countries in accordance with Espoo procedures had not been yet completed [5], when the Parliament adopted Law of Ukraine № 11088 on ‘Siting, design and construction of 3 and 4 power units of Khmelnitsky nuclear power station’ on September 6 – Iryna Golovko, a representative of the network of environmental organizations in Central and Eastern Europe “Bankwatch” in Ukraine says – the President can still stop this flagrant violation of international obligations by Ukraine, if he does not sign this law”.

The European community is quite as much concerned by the fact that the project, in violation of the legislation of Ukraine [6], failed to pass state environmental review that would allow to assess the risks and impact of the planned construction. Such neglect of planning and risk assessment of nuclear power projects is unacceptable in the world that is still experiencing the effects of the Chernobyl and Fukusima NPPs.

“If Verkhovna Rada of Ukraine ignores international conventions on nuclear power industry, it is an alarming sign of how little attention is paid to unacceptable risk assessment in connection with the use of dangerous technologies”, Jan Haverkamp, Greenpeace expert on energy issues in Central and Eastern Europe, says.

[4] According to the Convention on the Environmental Impact Assessment in a Transboundary Context (Espoo Convention), the procedure for assessing environmental impact of potentially dangerous facilities (including public hearings) should be conducted not only within the country but also in neighboring countries which may suffer from the negative impact of such projects. The list of facilities that can affect neighboring countries, contained in Annex 1 of the Convention, also includes NPP.

[6] The Law of Ukraine “ On Decision Making Procedure for Siting, Design and Construction of Nuclear Installations and Radwaste Management Facilities of National Importance” http://zakon2.rada.gov.ua/laws/show/2861-15