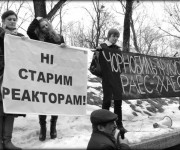 12 March 2012, Kyiv – On the occasion of the Fukushima NPP accident anniversary Ukrainian people initiated the protest against continued use of deteriorated nuclear reactors and establishment of new dangerous nuclear facilities. Public environmentalists explained why the Fukushima NPP accident scenario is highly probable for Ukraine. The efforts were made to put all nuclear power supporters on the list of liquidators of the next disaster. No willing governmental officials were identified.

“The Japanese accident happened in deteriorated nuclear power units operating far beyond the lifetime set by initial designs. In view of this, a range of countries with developed nuclear power refused from extension of operating lives of nuclear reactors. Nevertheless, Ukraine has been actively implementing a program aiming to extend service lives of the out-of-date reactors: in 2011 Rivne NPP Units ## 1, 2 life period was extended to 20 years more, and Yuzhno-Ukrainska NPP Unit #1, which is generally an experimental one, is being currently prepared for extension,” says Dmytro Khamara, the protest campaign organizer and Energy Expert at the National Ecological Centre of Ukraine.

Protest campaigners called the government to fulfil the decision On Improvement of Safety of Operation of Ukrainian Nuclear Power Plants as of 08.04.2011 issued by the National Security and Defence Council of Ukraine. It has been fulfilled by neither the Ministry of Energy and Coal Policy (which had to approve the updated Ukraine’s Energy Strategy to 2030 with regard to new challenges and threats to the governmental energy security in a three-months period) nor Energoatom, the National Nuclear Generating Company, which is still working on extension of the service lives of units of the national NPPs beyond the designed period.

In addition, proponents called for moratorium on continued operation of old power units and obliging the Ministry of Energy to ensure preparation for decommissioning of Yuzhno-Ukrainska NPP Unit #1 and review plans of the Ukrainian nuclear power sector development.

Call of public organizations addressed to the governmental heads:
http://necu.org.ua/zvernennya-schodo-zahroz-vid-yadernoyi-enerhetyky/